By Kelli Saunders, M.Sc., International Watershed Coordinator with the Lake of the Woods Water Sustainability Foundation

Algae are microscopic, plant-like organisms that can occur naturally in ponds, rivers, lakes and streams. Although they can be olive-green, red or black, depending on the species, the blue-green version most of us are familiar with are actually a group of bacteria, called cyanobacteria.  In the Rainy-Lake of the Woods watershed, algae have been around for years and, in fact, explorers, fur traders and settlers reported them 200 years ago.  Algae thrive on the nutrients (mainly phosphorus in this part of the country) in the water – some is natural and some is human-caused, like agricultural and stormwater runoff or leaching from septic systems.  In some cases, where nutrients are excessive, the algae can grow to the point where they combine and form a bloom or a surface scum.  When the ecosystem is in balance, the critters that eat algae grow in numbers as the algae grows, but with cyanobacteria, the colonies get so large that the consumers can’t keep up, and the end result is a bloom. While these blooms are unpleasant and can smell, some species of the blue-green algae naturally produce and store potentially harmful toxins that are released into the water and this is when algae really become an issue. 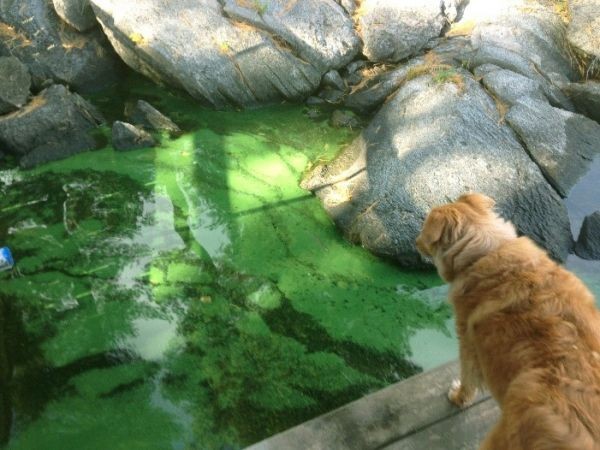 Toxins in algae are found in many Canadian freshwater lakes and elevated levels of toxins have been reported on Lake of the Woods in some summer months.  Strange that we can even find blooms on smaller lakes that are only accessible by canoe and have no development, but we can.  The culprit, in part, is climate change – not only are average water temperatures higher on Lake of the Woods, but it has become generally less windy, both of which may be playing a part in the algae problem. An analysis of ice-out records shows that the northern part of Lake of the Woods is having an average 28 more days of open water each year, giving another full month to grow algae annually.

Now that we’ve spent some time learning about algae, we will move on to other issues facing the watershed – some close to home and some not so close but still important to be aware of, given we are the downstream recipients of everything that happens upstream.

This series is provided as part of the International Watershed Coordination Program of the Lake of the Woods Water Sustainability Foundation (www.lowwsf.com).