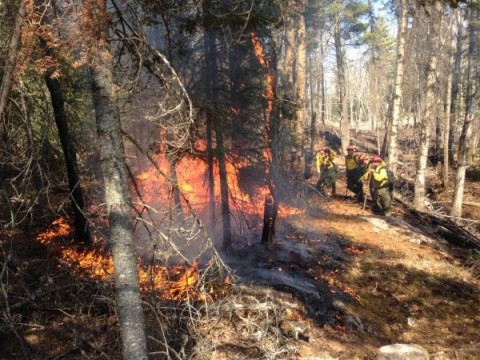 The Superior National Forest is planning to burn four different sites in the Boundary Waters Canoe Area Wilderness this fall. The fires will all seek to prevent the possibility of large wildfires in parts of the forest where there is still significant dead wood from the Fourth of July derecho seventeen years ago.

That storm damaged about 350,000 acres of trees in the Boundary Waters, and recent fires have demonstrated the danger of all that dry wood. The Forest Service cites both the 2011 Pagami Creek Fire, the largest in Minnesota history, burning about 145 square miles, and a smaller fire near Knife Lake in 2013.

"The intensity of these fires significantly increased when burning in areas of the 1999 blowdown," the Superior National Forest stated.

The planned fires are intended to slow down the spread of future wildfires, containing the flames to give firefighters time to manage it, as well as making evacuations safer.

The four fire projects are planned for October and November, times chosen in part to reduce impacts during the busy paddling season. During the burns, visitor traffic may be restricted in areas in the BWCAW. Two of the sites are in the Gunflint Trail area, one is north of Ely near Prairie Portage, and one is west of Ely near Crab Lake. Each one will depend on weather conditions.

Maps of the prescribed fire plans and other details will be posted on the Superior National Forest website.

Additional public notifications from the USFS will precede any prescribed fires.