West Nile virus has been confirmed in two dead loons; suspected in others. 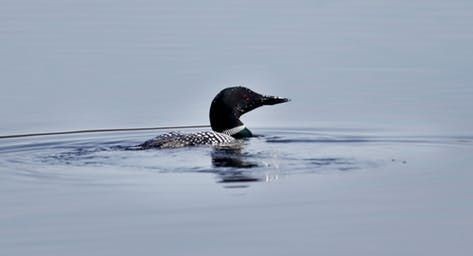 Arrowhead Lake in Britt, Minn., is home to the Laurentian Environmental Center, where plenty of nature lovers watch the comings and goings of the lake’s nesting pair of loons.

When one of the adult birds died last month, citizen-scientist Sherry Abts of Ely heeded a call to investigate. She paddled out in a kayak to find the remaining adult loon acting strangely. It died within days, despite no visible signs of injury.

Those deaths and six to eight other reports of loons dying this year in St. Louis County have state wildlife officials slightly on guard. Starting this week, the Department of Natural Resources is encouraging lake observers to report unusual loon mortality.

West Nile virus — which isn’t new or preventable — is to blame for at least three of the deaths so far, an expert at the University of Minnesota said Wednesday.

“There seem to be more calls than we normally get of loons dying off,” said Gaea Crozier, a nongame wildlife specialist for the DNR in Grand Rapids. “It’s enough that we’re starting to wonder if there is something going on that we should be concerned about.”

Crozier said the slight uptick in reported loon deaths in May and June has somewhat subsided. But lake residents and other loon watchers are being asked to contact the agency if they see several birds dying on a single lake. West Nile virus in loons can’t be treated, but knowing the cause of death can help rule out other, preventable causes of death, she said.

In addition to hearing about the two loon deaths on Arrowhead Lake, Crozier has received reports of loons dying on lakes around Biwabik, Eveleth, Ely and Hibbing.

Abts and friends from a group known as Ely Field Naturalists collected four of the dead loons on their own and had them delivered for testing last month to the University of Minnesota’s Veterinary Diagnostics Lab in St. Paul. One of the birds, recovered from a nest on Snowbank Lake near Ely, was skeletal, and couldn’t be tested.

Dr. Arno Wuenschmann at the University of Minnesota said the state Department of Health has concurred with his finding that the other three birds died from rapid disease that developed from West Nile, a virus carried by mosquitoes. One of the tested birds was found on Bass Lake in Biwabik.

Confirmation of the disease in loons is rare, partly because the birds have dense bones that cause them to sink when they die on a lake. Other carcasses are quickly picked apart by scavengers. But 14 years ago, Wuenschmann confirmed that an entire family of four loons had died after being infected by West Nile virus on Sandy Lake near Zimmerman.

He said the virus seems to kill loons quickly, just as it attacks crows, northern owls and other birds.

Crozier said another threat to loons in Minnesota is discarded fishing tackle. Pieces made of poisonous lead are sometimes eaten by the birds. But in the big picture, the DNR said, Minnesota’s loon population has been holding steady at about 12,000 birds.

Still, the DNR is now asking lake watchers who observe two or more dead loons on a single lake with no obvious injury or cause of death to contact the agency for tracking and possible testing. Specimens can’t be tested unless they are preserved and in good condition.