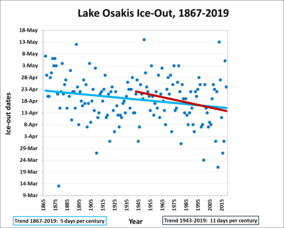 Minnesota is experiencing changes. It's getting warmer and wetter, which has shortened lake ice season. For example, Lake Osakis - an average-sized lake in central Minnesota - experiences ice-out more than a week earlier now than it did in the 1940's (see graph to the left).

Average temperatures are rising around the globe, particularly in northern regions like Minnesota. Minnesota's winters are warming faster than any other season. We don't get as cold as often anymore (see graph below).

Weather versus climate - you may wonder, what's the difference? Annual weather patterns are variable. Some winters will be cold, still more will be mild. Weather is a snapshot in time, like a photograph from childhood. Climate is measured over decades, tracking changes over the course of a lifetime. 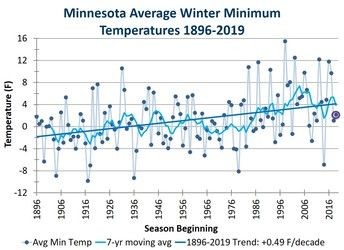 A shortened lake ice season has environmental and cultural effects for Minnesota:

* A longer open water season, in combination with increased stormwater runoff and erosion caused by heavier rain, means that many bodies of water will experience more algae blooms.

* Warming surface waters are leading to a loss of fish habitat for many prominent species, including trout and walleye.

We need more data on lakes all across the state to better understand how the ice cover season is changing.  The State of Minnesota began collecting lake ice data from citizens in the 1970's and is always looking for more volunteers. The larger the data sets available to researchers, the better we can understand the effects that changing ice cover has on lake health, local wildlife and citizen lake use. Become a MPCA Ice Reporter Today.