Each year Minnesota Power contributes money to the funds held and managed by the U.S. Forest Service and Minnesota DNR to be used for biological, recreation, and erosion projects. Those agencies reported the following contributions for 2020:

· WICOLA received $2,000 from the Biological fund for water monitoring.

· The US Forest Service received $51,850 from the Recreation Fund for two new accessible outhouses at Birch Lake Campground and material and supplies for the South Kawishiwi Pavilion.

In addition to discussing the Settlement Agreement, the parties are also able to share information about recreation, historic properties, erosion, biological, and water quality projects in the area. Below are a few of the topics discussed:

· Thin Ice signs were placed in 2020 and will be up again in 2021 for the snowmobile trail on White Iron Lake. St. Louis County Search and Rescue did some training there.

· Minnesota DNR reported that White Iron Lake had average walleye counts and some big northern pike. Birch Lake Reservoir had high walleye numbers but smaller in size. Cisco numbers were good. The reports will be published on the Minnesota DNR Lakefinder website.

Minnesota Power provided graphs of the 2020 water levels and discharges. Birch Lake Reservoir fell below the allowable operating band in September due to drought conditions. The group discussed the elevation of White Iron Lake which is not directly regulated by Minnesota Power. Some people commented that White Iron Lake was lower than normal in the late summer and fall. MN Power explained that this was in part due to the lower flow in the system because of the drought and that Garden Lake Reservoir is slowly drawn down from mid-June to mid-September each year. Birch Lake Reservoir returned to within the allowable operating band by November 10, 2020. The graphs below show the planned and actual lake elevations for Birch, Garden and White Iron Lakes during 2020. See https://www.mnpower.com/Environment/Hydro for more information on water levels and discharges. 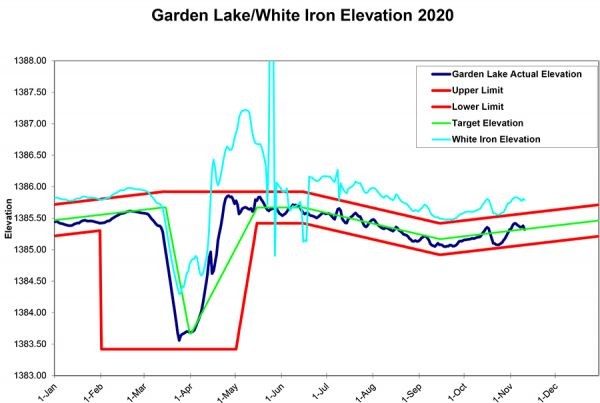 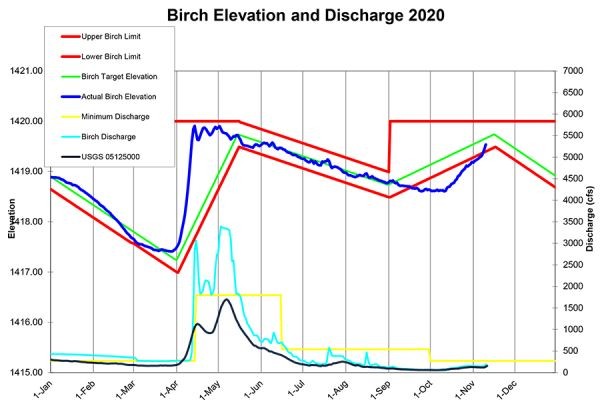